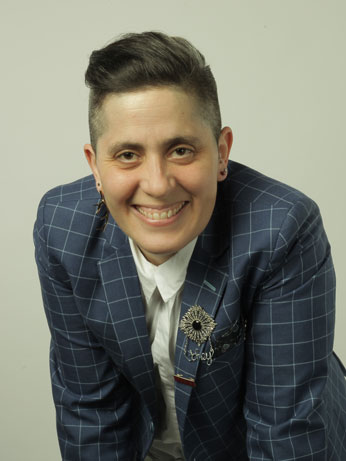 Chaplain Orev Reena Katz was drawn to Emmanuel for its “multi-faith stream” and its “wonderful sense of community and social justice.” Not a day goes by that she doesn’t think of her time as a Master of Pastoral Studies student and maximizes the training she received through earning a certificate in spiritual care and psychotherapy. “I use what I learned every single day I work,” she says. And, it was thanks to Emmanuel College that Katz met people working in the prison system in spiritual care—people who inspired her career path and who she now counts as both lifelong colleagues and friends.

“I had a very odd educational path,” she says. “I am a unique, queer being, and when I was 18 it was clear to me I didn’t want to go to university.” Katz had left Canada, lived in Spain for a time, and then moved out west to work for a radio station in Haida Gwaii (Queen Charlotte Islands). Her exploration of sound and performance were honed there while performing in feminist rock bands, and even playing in Klezmer bands. Creating sound and the act of listening were creative processes, and she delved into building sound sculptures exhibited in galleries including pitch_patch_pulse at Nuit Blanche in 2010. This work culminated in a Master of Fine Arts from New York City’s Parsons School of Design. Her thesis explored listening and empathy.

“Yet I had the inability to make a consistent income,” admits Katz, who became aware of the precariousness of teaching art while at the same time being an ordained Jewish priestess. She decided to pursue a certificate in clinical pastoral education as a means to extend her study of listening and the body. She did a nine-month placement at the Centre for Addiction and Mental Health followed by one in corrections in Minnesota. “All of these experiences shifted the direction of my career, and fermented my listening practice as being about relationships and less about the arts,” says Katz. She pursued a year of post-secondary education at another university before her transfer to Emmanuel College. Here she completed her Master of Pastoral Studies.

There was a standout moment in her time at Emmanuel. In her own words, Katz says, “There’s an amazing group of Buddhist students at Emmanuel College, mostly women, who have formed a student group. They were interested in exploring spiritual care in prisons and put together a panel. The panel was multifaith, but rooted in Buddhism. We delved into the idea of the mind as a prison—how to break through the view of incarcerated people as bad people who are worthless. We talked of using meditation and mindfulness to overcome these stigmas. Two of the speakers were employed at federal prisons and I was invited to moderate the event held in the chapel at Emmanuel. The experience was touching, honest, authentic.”

Spiritual care is a crucial part of working with incarcerated people who have minimal access to resources. It is deeply nourishing to work with people who are aware of their journey of transformation. At Emmanuel, she “deepened relationships with fellow chaplains and witnessed the blessings of the knowledge circulating in community.”

Since November 2020, the pandemic has been hard on tradition- or faith-specific chaplains who have been deemed non-essential. Spiritual care hasn’t been prioritized. Katz has pivoted into work that is far more psychotherapy-based. At the moment she is engaging with youth in the Toronto area who are at risk or involved in extremist hate groups like the Proud Boys, QAnon and Incel. “There are a lot of young people online who are engaging in this material and end up committing violent crimes,” says Katz. “I work with a team of five therapists and clinical managers doing prison-diversion work in a circle of care on the level of mental health. We support families and care givers to create a space where these youth are not drawn to extremism. It is incredibly rewarding.”

Katz led a webinar entitled Correctional Chaplaincy: Spiritual Care in the Inverted Temple on Thursday, February 4, 2021. If you missed it, you can watch the recording which is available on Emmanuel College's Facebook page.