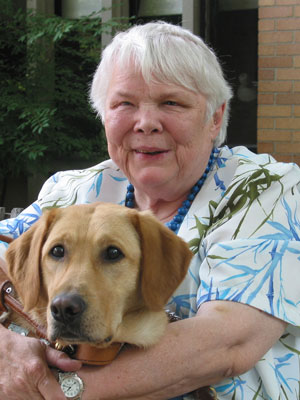 Jean Little, an award-winning author of children’s literature and two autobiographies, passed away at the age of 88 on April 6, 2020. Born with scarred corneas, she was declared legally blind and spent her life portraying characters who were faced with similar challenges. Little wrote more than 50 books and explored themes including physical and emotional challenges. Despite the sadness faced by many of her characters, she emphasized the resilience that can be found in children.

Little was born to medical missionaries in 1932. Her parents, Flora Gauld and John Llewellyn Little, were stationed in Taiwan under the auspices of the United Church of Canada. “Our parents were very open-minded and loving people,” says Patricia (Little) de Vries Vic 6T0. “There’s nothing we kids liked better than to go on a medical call into the countryside with one of them. It was a chance to get one-on-one time with Mum or Dad during the long car ride. Jean relished these opportunities.”

But World War II loomed on the horizon and the Littles returned to Canada in 1939. The family settled in Toronto where Little had access to a school that taught children with varying degrees of vision. The school suggested Little be put in a school with sighted children. When the family moved to Guelph, Ont., in 1940, Little attended a regular school. “Jean was very bright,” says de Vries. “She did not find the schoolwork overly challenging, but the children were cruel to her. They threw stones at her and chased her because she was different. She didn’t make any friends until she got to high school.”

Despite the six-year age gap between the sisters, Little and de Vries were very close. “Jean was a voracious reader even though she had to hold a book up to her nose to see the text. She would borrow everyone’s library card—our brothers’, our grandmother’s, our parents’—so that she could maximize how many books she could take out. In the winter months, she would load me onto a toboggan and pile up the books around me so that I could keep the snow off of them.”

Even during these early years, Little was not only an avid reader of fiction but she was a keen storyteller. “Jean would start telling me one of the amazing stories she had made up but would withhold the ending until I did her chores,” remembers de Vries. “She would make up song lyrics, too, if she didn’t remember all of the words. She sounded so confident in her lyrics that I assumed they were correct. We would sing together as we did the dishes, and it wasn’t until I encountered these songs elsewhere that I realized I had been singing words Jean had made up.”

With an aptitude for words, Little’s biggest fan was her father. He encouraged her storytelling and poem writing. He was proud that she wanted to pursue a B.A. in English language and literature at Victoria College.

Little arrived at Vic in 1951. She was discouraged by the administration to take a full course load. Not only did she enroll as a full-time student, she excelled. “I lived with Jean in Upper Annesley Hall and we became fast friends,” says Judy (Wicks) Alexander Vic 5T5. “She relied on her amazing memory to recall texts and lectures. She had no special help at University other than having good friends who would help her get to and from classes.” One of Little’s close friends, Sally McCrae Vic 5T5, took all of the same classes and also lived in Upper Annesley Hall.

Little was an eager participant in the life of Victoria College and would attend intramural basketball games to support her Annesley Hall friends. “At one such game, the Annesley team found itself one player short and was faced with conceding the game,” says Alexander. “Jean, despite being legally blind, agreed to put on running shoes and play. She stood, feet planted wide apart at centre court, and we would call out when we were about to place the ball in her hands. Both teams had a lot of fun and I surely don’t remember who won!”

Patricia de Vries has fond memories of visiting her sister at Vic. “I used to visit her on weekends and we would go to football games. To this day I still have dreams of coming down the Annesley staircase.” Although their father was busy with his medical practice, he read everything on the English language and literature curriculum so that he could have great debates with Jean when she came home for visits. “We said the two of them were going to University,” says de Vries. Sadly, their father died of a heart attack during the extraction of a wisdom tooth while Little was still at Vic. “Our father would have been so proud to see what Jean accomplished as a writer,” says de Vries.

After graduating from Vic in 1955, Little taught at what was then known as the Rotary Club’s Crippled Children’s Centre. Children would spend half the day in class with her and the other half of the day doing physical therapy. These children were an inspiration for Little. She taught there for about five years and also pursued courses in special education in Florida and Utah. Little was teaching when her first book came out, Mine for Keeps. Published in 1962, the book won the Little, Brown Children’s Book Award. This novel was about a child with cerebral palsy, and it was not the only book of hers that would receive an award.

Little wrote from the vantage point of lived experience. She wrote about people you didn’t necessarily see represented in fiction at the time and she avoided pat, happy endings. She was absolutely livid when a Japanese publishing house changed the ending to one of her stories so that it would have a saccharine conclusion. “Jean disliked books with unrealistic endings such as Johanna Spyri’s Heidi. Thanks to a summer of goat’s milk and fresh, mountain air, Heidi’s friend Clara is suddenly able to leave her wheelchair behind and walk,” says de Vries. “Jean found it objectionable that a disability had to be ‘solved’ by the end of a book.”

After Mine for Keeps was published, Little decided to make writing her full-time vocation. “Aunt Jean was a full-time writer by the time I was one,” says her niece Maggie de Vries. “Her writing was always a part of my life.” In fact, the two co-authored a book, Once Upon a Golden Apple, in 1988 while Maggie was living with Little.

The niece and aunt soon teamed up professionally. Maggie travelled with her aunt and read portions of her speeches at events. Maggie helped her travel and managed her public appearances. Soon, the duo was working together at the University of Guelph teaching a children’s literature class. “It was wonderful to teach that class with Aunt Jean,” says Maggie. “It was an amazing experience.”

From the age of 30 to 60, Little wrote about 20 books. Children would often send her fan mail and adults would ask her for professional writing guidance. “Aunt Jean really enjoyed giving people her time, especially children,” says Maggie.

“A child at heart,” according to Maggie, not only was it natural for Little to write for children, she excelled at it. Over the course of her career she was awarded six honorary degrees, was named a Member of the Order of Canada, had a school named after her in Guelph and received the Queen’s Diamond Jubilee Medal.

Just as Little was approaching what might have been retirement age, tragedy struck the de Vries-Little family. In 1998 her niece, Sarah de Vries, daughter of Patricia and sister to Maggie, went missing in Vancouver’s Downtown Eastside. Sarah had been murdered by serial killer Robert Pickton. At the time, Little was living with her sister Patricia and the two of them were raising Sarah’s children, Jeanie and Ben. “Jean got her first baby when she got her first old-aged pension cheque,” says Patricia pensively. “We borrowed a big, old-fashioned buggy and Jean would walk down our long, winding driveway singing lullabies to Ben. She adored those children.”

This led to a new chapter in Little’s life. Little and her sister worked as a team to raise Jeanie and Ben. The sisters ended up living together for the last 27 years of Little’s life. “Jeanie and Ben were a great boon to my Aunt Jean as both a person and a writer,” says Maggie. Inspired by her great-niece and great-nephew, Little went on to pen almost 30 more books. Completely blind in her latter years, advances in computer technology aided her writing process immensely. She also enjoyed a new independence with the help of four guide dogs over the years.

She was latterly working on a project that was to be a third autobiography about her time living with Patricia, Jeanie and Ben. She called it Sing Your Way Home. And although this is one story that will likely go untold, she once said, “Your only responsibility as a writer is to be true to the story that chooses you.” The world is lucky so many stories chose Jean Little.