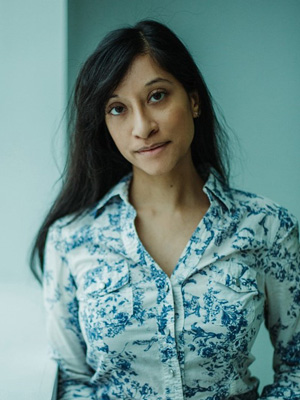 The Victoria College Emerging Leader Award recognizes recent graduates, 40 years of age or under, who have excelled professionally or who have notable accomplishments in their professional work or volunteer service, such as community work, humanitarianism and philanthropy. Doyali Islam is one of this year’s three recipients of the award with Erin Macpherson Vic 1T3 and Peter Politis Vic 0T4.

Described as an “emerging leader in Canadian literature” who “tirelessly paves the way for underrepresented voices,” Islam is an award-winning poet. In 2020, Islam was voted a finalist for the Griffin Poetry Prize, the Province of Ontario’s Trillium Book Award for Poetry, the League of Canadian Poets’ Pat Lowther Memorial Award, and the National Magazine Awards. Her book heft’s (Penguin Random House Canada) poems have been featured by many outlets including CBC Radio’s The Sunday Edition. In previous editorial roles for Arc and Write, Islam has been credited with dramatically increasing the representation of female, BIPOC, LGBTQ2S+, and emerging writers in these magazines. “My receipt of this award,” says Islam, “means that Victoria College understands the importance of mentorship and community-building within the arts, and the importance of the imagination. It is the imagination that births everything into existence, and leads us into our individual realities and collective reality as a civilization. Imagination coupled with empathy is critical for our times; out of it comes a desire to serve. If you have not mastered empathy, you are no literary master. If you have not mastered empathy, you are no leader.”