Victoria University has been collecting artefacts since its inception in 1836, but its art collection did not really begin to grow until after the institution moved from Cobourg to Toronto in 1891. Today, the University has holdings of nearly 1,100 works. The holdings range from historical artworks in a variety of media, including presentation silver, medals and other decorative arts to paintings and sculptures by the Group of Seven and Emily Carr.

Of course, its geographical position in the heart of a city with an evolving and stimulating art scene continues to be to Victoria’s advantage—as has been the increasing involvement and emphasis on women artists since the 1930s. The Women’s Art Association of Canada, formed in 1887, is still located on Prince Arthur Avenue, only steps from Victoria’s campus, and they frequently hold their visual and performing arts programming here.

Current art curator, Gerrie Loveys, notes that the collection as we know it today enjoyed a boost in the 1930s and 1940s when the women’s committee received funding to make an annual purchase of a work by an emerging Canadian artist. It was during this period that Jessie MacPherson, then dean of women, “undertook a cultural crusade in music and the visual arts.”

Loveys recalls that an early Globe and Mail article stated that the women students of Victoria College were among the first Canadian student bodies to have a ‘picture-buying program.’ The buying policy was to offer a set sum annually to a reputable artist in return for a painting. As this program began early, the University was fortunate to acquire a variety of works. The paintings were purchased primarily for the women’s residences and included notable artists such as G.A. Reid, Marion Long, Isabel McLaughlin and Yvonne McKague Housser, among others. In addition to these works and the remaining onsite collection, there are approximately 800 works on permanent loan to other institutions, including the Royal Ontario Museum and the Canadian War Museum in Ottawa.

The early collection has roots in teaching and learning and there is a renewed interested in moving back to collecting this type of visual media. Accordingly, the University has more recently focused on acquiring works by professors and alumni. One example is the Canadian artist Catherine Schmid Vic 6T5, who is based in Provence, France. As an undergraduate student, she studied modern languages at Victoria College, and received an honours bachelor of arts degree in French and German. During her undergraduate studies, she also took part-time courses at the Ontario College of Art (now OCAD), and studied painting with Aba Bayefsky C.M. By the late 1980s, she was exhibiting her work internationally in addition to teaching. Schmid has continued to teach and exhibit her work, mainly in France and Europe, Indonesia, the Art Gallery of Ontario and in private collections. 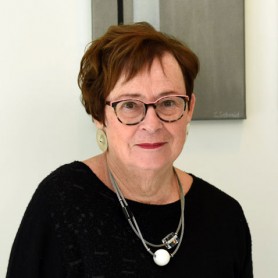 Schmid was visiting Toronto in 2017 at the conclusion of one of her exhibitions. Rather than bring one of her remaining paintings home, she inquired if the University might take it as a donation. Then curator, Gillian Pearson, was looking for a large-format piece to display in the Goldring Student Centre. The two connected; Pearson ended up choosing Fragmented Space, and the painting now hangs above the stairway on the first floor. Like many of Schmid’s works, the triptych reflects elements of chance and capturing a world full of possibilities, originating in her travel experiences. She cites the source of her inspiration as the fascination of bold contrasts. The contrasts of dark and light reveal a psychological metamorphosis from the internal to the external world, evoking mystery, consciousness and hope.

In the meantime, Pearson contacted Lisa Sherlock, Victoria University’s chief librarian, to see if she would be interested in more of Schmid’s work and her archives:

“When she visited with President William Robins and Gillian Pearson, Catherine had brought along her sketchbooks showing her work in progress, over time, and at that time we decided to create an archival collection of her body of work, or a fonds, containing her sketchbooks,” says Sherlock. “It helps to have these in Victoria University Library’s Special Collections, to show the development of her work and her style. We have, too, an example of the final results, a painting that will hang eventually, above the North Information Commons area in E.J. Pratt Library.”

Most recently, Schmid provided the maquette for her large-scale painting Out of the Darkness, which she donated in 2019. She has remained active during the pandemic. “COVID took away a lot of social pressure,” she says. “It allowed me to concentrate solely on my work. I guess I am a positive person; where there is a problem, I always believe there is a solution. That’s how I try to direct myself, especially in difficult times. It doesn’t take much to inspire me!”

Schmid hopes that she will be able to return to Canada and to the Vic campus soon. Until then, she will continue to “take advantage of every opportunity that presents itself. If you can, do it!” From living in residence to joining a club, Schmid believes the art world opened up to her because she was ready to embrace every opportunity that came her way.

Current students have noted that hearing stories and seeing visual representations of inspiring Victoria alumnae, like Schmid, is empowering and instills a sense of both belonging and pride. This past year, in an effort to welcome the new Annesley Hall residents, Loveys installed nine photographs and four paintings of notable Victoria women in the hall. Some portraits currently on display include: The Hon. Pauline (Mills) McGibbon Vic 3T3 and first woman to be appointed lieutenant governor of Ontario; climate scientist, Katharine Hayhoe Vic 9T4, Hon. 1T9; Kahontakwas Diane Longboat Vic 7T4, an elder, traditional healer and project manager in Aboriginal engagement and outreach at the Centre for Addiction and Mental Health; Tasha Schumann A.K.A Tasha the Amazon, an indie hip-hop producer-musician, entrepreneur and mentor; and Tanya Talaga Vic 9T3, an Ojibwe author and truth-teller. Talaga’s portrait was created and donated by another Canadian artist, Jeff Sprang Vic 7T7.

Sprang took art courses at OCAD after attending Vic for English literature. He always had an artistic side and enjoyed perfecting his use of watercolours. As he pursued his career in PR for the Ontario Public School Boards’ Association, he had the rare opportunity to meet Nelson Mandela in 1990 at Toronto’s Central Technical School. Sprang was moved by Mandela’s message. With the help of photos he had taken of Mandela, Sprang was inspired to paint the hero’s portrait. Mandela generously signed a selection of the prints and thus began Sprang’s foray into philanthropy through fine art. All money made from the sale of this print went to help Black students in South Africa.

“I really love painting portraits of people I admire,” says Sprang. “Portraiture is a real challenge— to create a likeness of someone else. I love the process and am often pleasantly surprised by the end result.”

As a past student of Northrop Frye Vic 3T3, Emm 3T6, Sprang felt the draw to paint the famous, literary scholar. In 2005 he donated his portrait of Frye to Victoria University with proceeds from prints of the portrait, The Conspectus of Genres, supporting undergraduate students.

Later in 2005, Sprang donated his portrait of Stephen Lewis to the Peel District School Board. This time, proceeds earned from prints went to the Stephen Lewis Foundation to support funding for community-based organizations for people suffering from HIV/AIDS in sub-Saharan Africa.

In addition to painting world figures, Sprang has painted many famous Canadians including Drake, Gord Downie, Penny Oleksiak and Leonard Cohen. When asked about his favourite portrait to date, Sprang is quick to say, “My favourite is always the next one!”

His most recent project came about as a result of the COVID-19 pandemic. “I began watching a lot of hockey during the lockdowns,” says Sprang. “I chose to do a portrait of Auston Matthews, captain of the Toronto Maple Leafs. Before I knew it, I had built momentum and completed 12 portraits. I am going to auction off the portraits this spring to support the Toronto Education Opportunity Fund (TEOF), an organization that brings nutrition programs to 6,000 students in priority neighbourhoods.”

Victoria University is grateful for the support of its art collection by so many generous community members. Vic is proud of its collection and delighted that alumni are counted within the pool of talented artists who have created these wonderful works of art. The next time you are on campus, keep your eyes open for some of the many beautiful and unique pieces that are owned by Victoria University. Look carefully—you might know the artist or the subject from your days at Vic!

This article appears in print in the Winter 2022 issue of Vic Report magazine. Read the full magazine here.